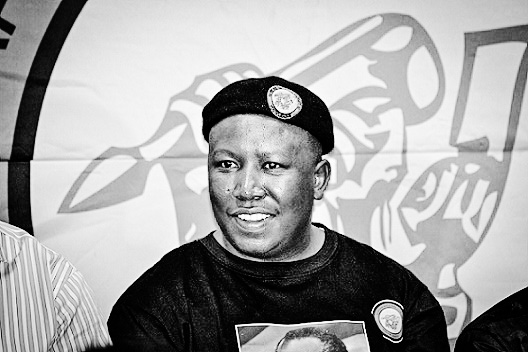 With an almost 40-year age gap, their partnership has played a profound role in shaping the tone and bent of post-apartheid politics. Although they were initially close allies, in recent years Zuma has served as an effective punching bag for the young leader. Malema has made a meal out of Zuma’s shortcomings and his mistakes. He has used each fresh scandal related to the president’s alleged misuse of state funds, or his relationship with wealthy benefactors such as the Gupta family, or his relationships with women, to demonstrate to the electorate that Zuma is unworthy of their votes.

Yet despite their differences, the men are startlingly similar. Indeed, it was Malema’s ability to mobilise, cajole and cause strategic political chaos that helped to bring Zuma to power.  Malema was the snarling pit bull whose presence allowed Zuma to play the even-keeled and charming elder statesman.

Over time, Malema’s adversarial approach to politics (and Zuma’s implicit support for the conduct) became emblematic of a new riotous culture in the ruling party – one in which booing, populism and loyalty to personalities rather than policy positions became the norm. Malema may have been expelled from the ruling party, but his tactics of disruption and conflict have continued to mar elective conferences and major events.

Both Zuma and Malema can turn on the charm. Throughout most of his first term of office, Zuma was often referred to as “the people’s president”. Similarly, Malema is able to draw large crowds and inspire his followers with his common-sense appeals. More worryingly, both men have been embroiled in legal cases that have required them to fend off allegations of corruption and abuse of state connections and resources.

Despite these similarities, there are two key differences between the two men. It is these differences that will determine Malema’s political future in a post-Zuma South Africa. The first lies in the demographics they attract. The second relates to their commitment to constitutionalism.

In terms of demographics, as a rural African man with a poor education and humble beginnings, Jacob Zuma has risen to the highest office in the land in what is seen by many in his base as a clear sign that the politics of the apartheid era are over. Similarly, Malema also comes from humble beginnings – his roots are in the township of Seshego in the province of Limpopo. However, the young leader offers an equally powerful and perhaps more resonant example of the post-apartheid dream. His rise from the streets of his township, to being one of the most powerful political figures in the country, is as meteoric as Zuma’s rise from cattle-herder to president.

However, Zuma’s base – indeed the base of the African National Congress (ANC) – is dying.  Appealing to the rural poor in a country that is rapidly urbanising holds little strategic value.

The EFF, on the other hand, is attractive to the exploding youth demographic: those under the age of 30, whose numbers are on the rise. In this sense, then, Malema’s future is bright. His core constituency is young and urban.

This, above all else, marks the difference between Malema and Zuma. It is not just Malema’s age that works in his favour, it is that those who support him are young themselves; they represent the future. Whereas those who are being considered for the top position in the ANC are in their mid-to-late 60s, Malema will still be under 40 in 2019 when Zuma steps down.

Still, at a more substantive level, what matters most is how similar the two men are when it comes to defending or trampling on the country’s iconic constitution. Zuma has already demonstrated his contempt for the rule of law and for the spirit of the constitution in the past five years and has been sanctioned by the constitutional court in a judgment that ordered him to pay back some of the costs of building his village palace in Nkandla.

Malema, on the other hand, began his career by undermining democratic processes within his party and has faced a number of corruption and fraud court cases.

In recent times, however, as he has taken on Zuma, the young leader has spoken eloquently in defence of democracy, accountability and the constitution. Those who are sceptical of his about-turn say “a leopard doesn’t change its spots”. They worry that after 2019, without Zuma in the top spot, Malema may move into a central position within the ruling party. Firmly ensconced there, he may forget his allegiance to democracy.

These anxieties are not unfounded. Yet they diminish the agency and sophistication of the South African voters. South Africa is a country whose citizens are torn between old loyalties to the liberation movement and a deep commitment to democracy on the basis of their apartheid past. How Malema chooses to negotiate these competing interests will determine his future, and in the process, the future of the country.

He must play his cards right because there is a real risk that, fed up with the sort of charismatic populism that Zuma and the ANC have represented in recent years, the electorate in 2019 may see Malema as too deeply embedded in the very culture of cronyism and populism that they wish to escape. If this is the case, voters may punish not just the ANC but also the combative, disrespectful and machismo style of leadership and politics that Zuma and Malema have represented. In so doing they may decide to reject Malema, opting instead for a fresh start with a candidate who is yet to emerge.

There is no question that even in such a scenario Malema has a long career ahead of him. In the end, the battle for the hearts and minds of South Africans will not come down to age or political party affiliation or a struggle between two men who have shadowed each other for years. All indications are that after nearly a decade of infighting and political decay, it is the politician most closely aligned with the values espoused in the constitution for which so many South Africans fought and died for, who will win the day. Malema would do well to keep his eye on this political reality.

With a background in funding non-profit organisations fighting for democratic change in Africa, Msimang has become a powerful advocate for the better use of money and power on her continent. She writes about money, power and sex. She is the former executive director of the Open Society Initiative for Southern Africa.

Frantz Fanon in his famous book, “The Wretched of the Earth” states that “each generation must, out of relative obscurity, discover its mission, fulfil…