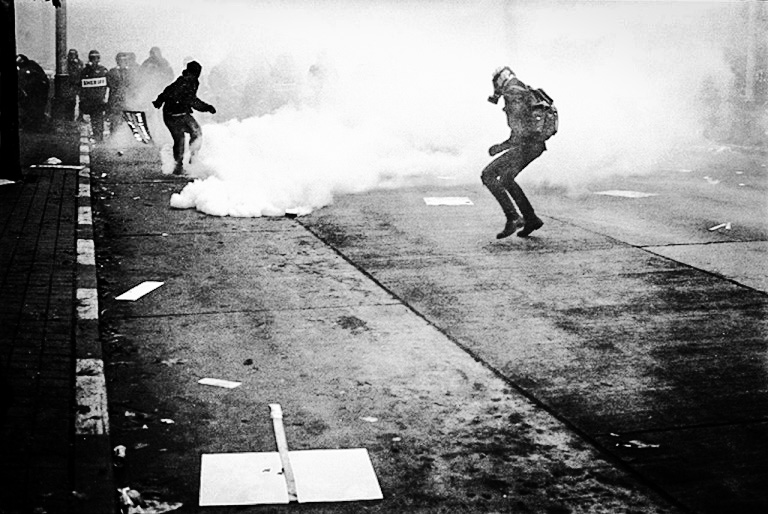 For some time now people who write about South Africa have been suggesting that the country is in the process of changing.

It is now time to accept that the country has changed.  We are in a new phase, one that is characterized by a rejection of compromise as a tactic for managing democratic intercourse. This rejection of compromise politics does not come from one quarter alone.  There has been a tendency to suggest in recent weeks that student leaders within some Fallist groupings are highly intolerant, and that they are engaged in a dangerous form of brinksmanship.  It is clear that this is an incorrect characterization.

These divisions are indicative of a new, and potentially long phase in which our politics is increasingly marked by intransigence and radicalism.  Unlike others who worry about radicalism and intransigence, I am not convinced about whether the digging in of heels we are witnessing will take the country forward or backwards in the long run.  It is too early to hazard a guess.  While there is much that is worrisome about stubbornness, it is also important to understand the potentially important  textures of our collective obstinacy.

In the conventional model of democratic politics, you put forward an idea, debate it and then work to build support for your view.  Democratic societies reward those leaders who work out solutions, bridge divides and calm tensions.  These rewards exist not simply in the electoral set up, but also through other sorts of incentives.  Prizes and awards are given to bridge-builders; buildings are named in their honor and they are rewarded with public accolades, academic honorifics and so on.

While the democratic dispensation continues to exist, and bridge builders continue to be seen as ‘leaders,’ their credibility is diminishing.  Instead it is evident that in South Africa, there are many ways in which radicalism and intransigence have replaced compromise as the go-to instincts of the body politic.

This is of course because the strategy of compromise has had mixed results in the last two decades. On the one hand, the compromise brokered in 1994 has resulted in a relatively ‘stable’ society and the growth of a significantly larger black middle class than there was at the end of apartheid.  Educational opportunities have improved and many more South Africans have access to services like water and sanitation than did under apartheid – both in real terms and as a proportion of the population.

At the same time, compromise has suffered a bad rap because of the ways in which it has been linked to other negative phenomena within the ruling party.  As careerism, political thuggery and an obsession with big-man politics have ascended in the ruling party, so to has the idea that the ANC’s approach of mediation and negotiation to resolve conflicts with political and social opponents was in fact a strategy for mere self enrichment.  In other words, because the ANC has both championed compromise as a tool for managing conflict, and has also become more and more corrupt in its dealings with big business, it is easy to conclude that compromise politics is in fact corrupt politics.

In addition, because compromise was the mechanism that was seen to have ushered in Rainbowism, compromise itself has come to be associated with selling out.

This is a grave mistake.

Still, for the purposes of clarity it is important to separate the ideological underpinnings of compromise politics from the other tendencies that have deepened and solidified in the post-apartheid ANC.  For example, it would be easy to suggest the ANC’s cosiness with big business is a function of compromise politics. Certainly, compromise brought the ANC and big business into closer proximity to one another, but it is careless to argue that at its heart the ANC’s neoliberalism is only or even largely the result of its reliance on negotiation and compromise with external actors as a political strategy for securing and then sustaining democratic practice.   One can accept political compromise as a tactic, without accepting that concessions must be made on each and every issue confronting a society. One can hold firmly to principles, whilst accepting that at a macro level compromise is a critical tactic in a democratic society.

So, we are now in a new era.  We are no longer wondering where we are going, it seems we have arrived in a new place in which we are witnessing radicalism and intransigence as a modus operandi across our society.

We see it in the ruling party, where small matters like appointments and parastatal deployments take up inordinate amounts of time and leave blood on the floor time and again.  We see this radicalism and intransigence amongst university administrators who took far too long to comprehend the tactics of the student movement and so made strategic blunders early on, that have lost them trust and vital time.  We see it in the radicalism and intransigence of some of the leaders of the Fallist movement who are prepared to inflict maximum damage now in order for long-term goals to be achieved.  We see it amongst many white South Africans who continue to bury their heads in the sand by continuing to organize, protect and enrich themselves on the basis of race.

We see this radicalism and intransigence also in the actions of protesters in peri-urban communities who burn schools because of municipal demarcation issues or to highlight lack of water and sanitation.

My observation is merely that where the country stands today is a consequence of many separate sections of society saying that they have had enough of compromise.  We are a very young nation but we were founded on the very notion of compromise.  We were celebrated the world over for our ability to bring together disparate views.  During the 1990s, South Africans elevated the middle ground to the high-ground.  Yet here we are today, gripped by radicalism and intransigence and an outright rejection of the compromise tactics that carried us to this point.

This is both startling, and completely unsurprising.   It is also not as frightening as some might think.

Those of us who were already adults during the heady transition days prided ourselves in being a nation of negotiators.  The brink was a bad place and we were happy to no longer be on it.  I certainly believed, as the new millennium dawned, that South Africa might face some tough times ahead, but that the country would be defined by its ability to talk its way from the ledge.

Compromise and negotiated settlements were part of the national bloodstream – they would save us.  So of course looking at the way in which across many fronts, we are failing to resolve impasses is startling. Given the widespread embrace of compromise across South African society until recently, it is now startling to have leaders within a range of different social groups no longer seeming to respect negotiation and compromise as tools for social progress.

At the same time of course I am completely unsurprised by the starkness of this development and the ways in which it is manifested.  Make no mistake: There are valid and ethical reasons to reject compromise, even if one is not a political purist. There are some issues and some moments in history in which compromise makes no sense; moments in which moral and economic victories are within reach and ought to be fought for unequivocally without compromise.

The rejection of the politics of compromise by many protesters on the left is the logical conclusion of almost two decades of insipid and terrifying compromises on the running of the economy, institutional racism, the functioning of our education systems and the layout and structure of our urban and rural spaces.  One can in fact, embrace Rainbowism, and also recognize that compromise has not taken the poorest South Africans very far.

I have less patience of course for those who reject compromise because they are reactionaries – those like Afrikaans singer and activist Steve Hofmeyr and his slightly more urbane ilk in Afriforum.  Still, it is worth nothing that the absence of a political narrative explaining why compromise continues to be necessary has allowed these elements to strengthen their voices and mobilize broader support than they should have.   In other words, regardless of what you think of Mandela’s latter-day politics and irrespective of your thoughts on the ANC leaders who negotiated the settlement that lead to the historic 1994 elections, there is no denying the amount of effort that went into building and sustaining the narrative of the Rainbow Nation.  It was potent because it was carried forward consistently and eloquently, even in the face of its obvious weaknesses.

There has been no commensurate energy invested in revising and recalibrating that narrative to take account of growing social strife today.  The limits of the 1994 political compromise have inevitably begun to give at the seams and yet I cant think of a single leader inside or outside the ANC who has managed to coherently and productively steer the conversation about politics and inequality towards calmer waters.

The present crisis on campuses illustrates this point.  The university crisis is above all, a failure of those who championed compromise politics to adapt to a dramatically different political context.  The old words no longer fit and the old guard are now too old to re-strategize.  The problem isn’t so much that they don’t understand the radicalism of the youth, or even that they don’t know how to communicate with a strident new generation.  The problem seems to be that those who sit in positions of power within the state and universities simply do not see their politics and their positions as being as radical as those of the students they so oppose.

When the militant protest for free education meets the militant defence of the rights of those currently enrolled in schools (which implies a defence of the status quo, albeit for pragmatic reasons to which I am deeply sympathetic because I am of a certain generation and so I do not reject pragmatism), we have a stalemate.

Leadership matters most in times like this and thankfully there have already been some creative attempts to broker peace.  Still, South Africa seems to be tainted by its past embrace of compromise.  The last two decades have turned compromise into a curse. The transition in 1994 saw both a revolution and a war averted.  We are now howling at the past, and making up for lost time.  The whites and the blacks and the young and the old; the government and the activists; the progressives and the conservatives: We are all regretting what we gave up because twenty years ago compromise became both a means and an end.  This time maybe we will be wiser. If our leaders were trustworthy they would help us to see compromise for what it must be:  A tool that can save us from having to burn ourselves anew each time we rage.

*This article was published in Africa is a Country. To view the article on their website click here.

With a background in funding non-profit organisations fighting for democratic change in Africa, Msimang has become a powerful advocate for the better use of money and power on her continent. She writes about money, power and sex. She is the former executive director of the Open Society Initiative for Southern Africa.

To vote or not to vote? That is a question playing in some voters’ minds. The Big Debate hosted by Redi Tlhabi engaged this…