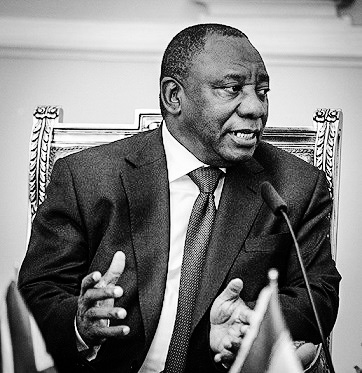 After its watershed 54th national conference weighed down by corruption, scandals and government failure, the ANC, for all practical purposes, faces the post-conference future almost as two separate parties, despite attempts at unity.

Ramaphosa narrowly won the party leadership against Dlamini-Zuma, the former African Union head. President Zuma and his allies unsuccessfully campaigned for Dlamini-Zuma. Zuma is facing corruption charges and many of his allies also fear prosecution for alleged corruption. They wished that, under a Dlamini-Zuma presidency, they would be protected from prosecution.

The ANC’s top leadership, called the Top 6, is evenly matched between the Ramaphosa and Dlamini-Zuma/Zuma group. The new national executive committee (NEC), the party’s highest decision-making body, is in turn dominated by the Dlamini-Zuma/Zuma faction.

Ramaphosa may want to get rid of President Zuma as quickly as possible and take the government reins himself. However, because the pro-Zuma group has such a powerful grip on the ANC, Ramaphosa would not be able to fire him. He will have to negotiate an exit settlement instead, which may be protracted as Zuma and his allies may want safeguard guarantees.

KwaZulu-Natal chairperson Sihle Zikalala has already warned that any move to push Zuma out before the 2019 national elections would be opposed, arguing that both Ramaphosa and Zuma should remain in their respective government positions until then.

Ramaphosa has made fighting systemic corruption a priority. However, he is likely to find it difficult to tackle corruption, in particular by Zuma and his allies, without facing fierce resistance.  This could even split the ANC itself because the pro-Zuma camp controls at least half of the party.

A case in point at the conference, was when it was proposed that the ANC’s integrity committee, which investigates wrongdoing by party leaders, should be strengthened. Zuma-aligned ANC provinces such as KwaZulu-Natal, the North West and the Free State strongly opposed this. The proposal was deferred to the ANC’s national general council which will take place in mid-2020.

Given the country’s distressed economy, which plunged into a technical recession in the first quarter of the year, some global rating agencies have assigned the country junk status.

It is extraordinary that ANC’s 5-day conference unprecedentedly only spent half a day on discussing policies. The conference was light on policies. Old policies were recycled and, in many cases, may not have been executed before. However, very little was said about how these would now be improved.

Furthermore, in an indirect acknowledgment that the party was losing supporters to the left-populist Economic Freedom Fighters (EFF), former ANC Youth League members who broke away from the ANC in their opposition to President Zuma. The conference responded by trying to out-populist the EFF, by adopting populists, slogan, and rhetoric-based policies.

The ANC called for the amendment of the Constitution to allow for the expropriation of land without compensation, without the party discussing why it has been unable to implement land reform, among others, because of incompetence, corruption and the lack of political will – under existing laws which allows for expropriation of land for redistribution and public interest purposes.

The resolution almost caused the collapse of the ANC conference, with pro-Ramaphosa groups rejecting it. But it was carried with the support of pro- Dlamini-Zuma/Zuma groups.

Given the amount of energy spent on discussing the ownership of the central bank, a change would have little impact on the mandate of the bank – which is ultimately a political decision, or on how it operates. It will be costly to buy out the private shareholders.

The conference policy discussion also spent the bulk of its time trying to define what is “monopoly capital” and also failed to do so. The Dlamini-Zuma/Zuma faction has blamed most of the slow growth, state failure and lack of job creation on the dominance of white and foreign businesses in the economy.

Although monopolistic business practices, opposition to genuine redistribution and corporate greed are very real, the Dlamini-Zuma/Zuma faction have inflated this to hide state failure, corruption, and incompetence.

A day before the conference, Zuma announced that higher education would be free for poor and working-class students. It was timed to boost the ANC presidential campaign for Dlamini-Zuma. A special commission appointed by Zuma last year to investigate whether free higher education was financially feasible ahead of the conference said it was not viable at this stage and proposed that alternative models should be investigated.

The National Treasury has said the proposal would be financially impractical right now, given the lack of public resources available, a drop in tax income and public sector belt-tightening measures introduced recently. The conference endorsed Zuma’s proposal, resolving that it must be “speedily” implemented.

Very little was said about improving primary and secondary public education – which is continuing to produce blacks from poor and working-class communities, who are practically illiterate and ill-equipped for work or higher education.

If the ANC goes into the 2019 national elections with two centres of power, Zuma at the head of the government and Ramaphosa at the head of the party – which is in any case split along both Zuma and Ramaphosa supporters – will remain paralysed, with very little progress to be made in turning around public services, cleaning up SOEs and tackling corruption, which is necessary for the ANC to retain its electoral support.

The ANC will then at best win the elections, but without an overall majority, having to put together a coalition or at worse, the DA and EFF would govern in a coalition as seen in the Johannesburg Metro. The conference, rather than heralding in the renewal, revival, and unity of the ANC, may have brought about the decline, fragmentation and ultimately the loss of power by the ANC.

It will be a tragedy if Ramaphosa, after finally securing the job that has eluded him for two decades, is hobbled at every step by the Dlamini-Zuma/Zuma faction in such a way that the ANC loses more electoral ground, and ultimately loses power.

Ramaphosa, South Africa’s most experienced political operator, who has faced almost every crisis imaginable, and has the inner resources, experience, and talent, will have to dig deep to turn around the ANC, given the formidable internal obstacles he will be facing.

When the High Court of Malawi, sitting as a Constitutional Court, annulled the 2019 presidential elections results and ordered a fresh election, the court…