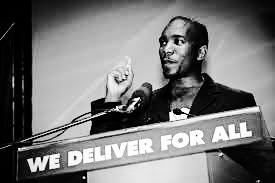 Can the Democratic Alliance chart a way forward for liberalism and rid itself of a pernicious form of whiteness, asks Christi van der Westhuizen.

The Democratic Alliance (DA) is the only party predicted by election surveys to show significant growth in the 2014 election. Although the DA draws on the former National Party’s support base for its constituency, its potential for growth paradoxically lies with voters who reject the institutionalised racism the NP stood for. This conundrum, what one could call “the DA’s race fix”, is what the party must ultimately surmount.

Helen Zille’s leadership of the DA has been doubted, but it is unquestionable that the party under her hand has moved away from its galling and arrogant “angry white man” position to an inclusive message that presents a bridging of race and gender divides.

Whatever one’s ideological analysis of the DA, it can only be good for South Africa if, as has happened, racialised and gendered messaging becomes unthinkable for the main opposition party. It is a shift that advances constitutional values and deepens democracy.

Under Zille, the party’s leadership profile has become more diverse and, seemingly, the contestation of ideas in the party has risen – as in the brouhaha over the DA’s support in Parliament for the Employment Equity Amendment Bill last year.

That furore probably cost the DA black votes, and deservedly so because, even as DA federal chairperson Wilmot James branded Leon and Johnson “rank conservatives”, Zille announced an about-turn on the Bill.

In the process, she undermined parliamentary leader Lindiwe Mazibuko, raising questions about whether the party itself was not guilty of “fronting” – a practice outlawed in the Broad-based Black Economic Empowerment Amendment Bill, for which the DA also voted last year.

Zille acknowledged the “difficulty” of moving “to a nonracial society when disadvantage is there as a result of racial discrimination”.

But she claimed that consideration of race would be unnecessary: “If we had fast enough growth and good education … there would be such a demand for skills” that race would be immaterial.

The DA’s subsequent policy conference declared its support for employment equity, but without demographically based targets. How is equity achievable without targets?

Ironically, it seems the DA merely went full circle. Zille’s statements, in combination with targetless employment equity, confirmed the party’s position on race as stated under Leon. In 1998 the then Democratic Party released a document titled The Death of the Rainbow Nation: Unmasking the ANC’s Programme of Re-racialisation. It’s a lesson in white resistance to overturning the effects of apartheid, even as it denies such resistance, seeing employment equity as “minorities rolling over [and] surrendering their rights and protections”.

“Racial transformation”, says the document, means that “individuals cannot compete as individuals”. Contrary to what “the left” suggests, “opportunities” are not finite. “Blacks” and “minorities” can both be “advanced” if there are more “opportunities”. “Advancement” should be “colour-blind” and individualist. Indeed, in this scheme, nonracialism equals colour blindness. Irrespective of race, all will benefit when opportunities grow.

Zille’s statement that a consideration of race would be unnecessary if economic growth was rapid and education good boils down to a reassertion of The Death of the Rainbow Nation’s ultimate position: that expanding opportunities would ameliorate any need for purposive correction of the racial effects of apartheid.

Herein lies the nub of the DA’s race fix. This line of thinking – that education and economic growth would be the universal remedies to lift black people out of the quagmire left by apartheid – can be traced back to Helen Suzman’s Progressive Party, which insisted on a qualified vote for black people. That position had its origins in the British liberal position that allowed a handful of property-owning black men the vote in the Cape Colony in the 1800s.

The thinking is of a colonial variant of liberalism found in South Africa, one that historically set the criterion for black civic participation as “levels of education”. Today it proposes that black people can enjoy the fruits of democratic citizenship if they have the requisite education levels to grab “opportunities” created by an unfettered capitalism. Undoing race-based deprivation is made contingent on black people’s eventual attainment of education and “opportunities”.

In her rebuttal to Leon and Johnson last year, Zille said: “It is pure mythology that our predecessor parties embodied [a] liberal purity from which we are now departing.” In the past, “liberal purity” included implicit support for white supremacy.

The question is whether the DA can rid itself of this pernicious form of whiteness and chart a new way forward for South African liberalism in the 21st century. Executing this daunting task will determine its relevance in the 2019 elections.

Prof. Christi van der Westhuizen (Ph.D.) is an author and Associate Professor in Sociology at the University of Pretoria. Her books include Sitting Pretty: White Afrikaans Women in Postapartheid South Africa (forthcoming, 2017), Working Democracy: Perspectives on South Africa’s Parliament at 20 Years (2014) and White Power & the Rise and Fall of the National Party (2007). She started her working life as a journalist at the anti-apartheid weekly Vrye Weekblad and later worked as Associate Editor at the global news agency Inter Press Service. Previously she held associateships with the Institute for Reconciliation and Social Justice, Free State University and the Institute for Humanities in Africa (HUMA), University of Cape Town. As a regular commentator in local and international media, she received the Mondi Paper Newspaper Award for her political columns.

Democracy Works Foundation enthusiastically announces the start of its latest project aimed at building the next generation of ethical and responsive leaders. Democracy Works…