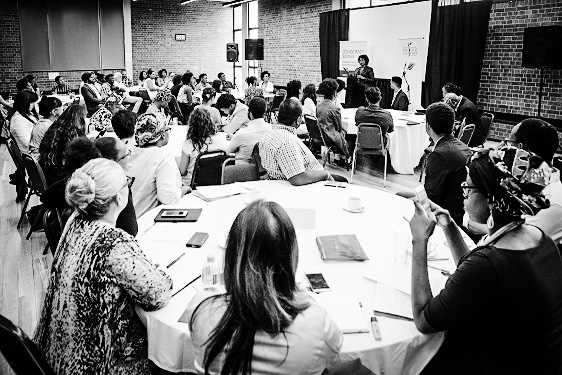 The increasing lack of funding and support to civil society organisations in South Africa and globally has meant a shut down of civic space and hampered the ability of organisations to carry out their work on the ground with local communities. The move from a development funding approach to one of trade agreements has meant that traditional forms of funding are slowly drying up. What does this mean for civil society organisations, what needs to change and more importantly how does this impact society at large?

South Africa’s civil society organisations, which have been at the heart of the fight-back against public corruption, mismanagement, and patronage, are facing a funding crisis, which may herald the collapse of many of these valiant organisations.

Civil society organisations not only play a crucial oversight role over democratic institutions, monitor human rights and give citizens, especially the poor, vulnerable and excluded, the tools to know and assert their rights, they also provide valuable public services especially in the face of the collapse of public service delivery across the country.

Many South African civil society organisations depend heavily on industrial country governments, development aid and philanthropic foundations for funding (StatsSA 2017). South African civil society also depends on funding from global multinational organisations, such as the United Nations, which get the bulk of their funding from industrial countries.

More recently, many industrial countries have cut development aid to South Africa, arguing that it is a middle-income country which has made significant advancements in development over the past few years (Tjønneland et al 2008; ICAI 2016). In 2013, for example, the United Kingdom, said it would cut R250 million of development aid to SA over two years, threatening the survival of South African civil society organisations depending on its funding (ICAI 2016).

Immediately after 1994 following the first non-racial democratic elections, many Western governments, international development agencies, and NGOs, now either reduced their funding or rechanneled its funding to the newly-elected post-apartheid ANC government.

The EU and individual member countries have reduced development aid to South Africa, now focusing on trade through the European Partnerships Agreement (EPA).

The EU has also focused more on channeling its own development funding to Eastern Europe – as part of the EU enlargement. Similarly, the US government has shifted towards promoting trade with South Africa, rather than development aid, through the African Growth and Opportunities Act (AGOA). Furthermore, following the 2007/2008 global and Eurozone financial crises many industrial countries have reduced or cut their funding (OECD 2012).

Donald Trump’s election as US president raises the spectre that official development assistance to South Africa under his presidency may be dramatically slashed. The US Secretary of State Rex Tillerson, in August 2017 last year, suggested cutting the country’s foreign budget by 30%, mostly African operations (Reuters 2017). The US, through government, private sector and philanthropy is the biggest source of outside funding for development assistance, including civil society, to South Africa and Africa.

For example, the US Emergency Plan for Aids Relief (PEPFAR) has been a significant source of income for South African civil society organisations. The US has a series of projects to ease the impact of industrial country-induced climate change on Africa. Of these, the largest one being the US$7bn Power Africa project provides power from renewable energy to six African countries. A substantial chunk of this goes to South African civil society organisations. Such programmes and donor pledges may be reviewed by a Trump presidency.

The general backlash in Western countries against foreign aid to African and developing countries in general, has meant that many industrial countries have either downscaled their contributions to the UN agencies and other multilateral global donors (OECD 2015; Devex 2017). This means that those organisations have less funding for civil society organisations.

A national lottery was introduced in South Africa on 11 March 2000. As part of its licensing obligations, a portion of the lottery income is distributed to charities, NGOs, and civil society groups.

Increasingly, corruption, mismanagement, and inefficiencies in government have caused many civil society organisations receiving money from government to do so late, forcing many to cut their operations and close down. Self-inflicted slowdowns in the South African economy caused by public sector inefficiencies, corruption and mismanagement have undermined investment, reduced tax income and led to capital flight and hoarding. This has obviously led to less public funds being available for civil society organisations also.

Furthermore, under the Jacob Zuma presidency, civil society organisations critical of government has increasingly been under risk of having their government funding slashed.

A recent report by the Funding Practice Alliance (2017) shows the NDA “failing” in its mandate of distributing funds to deserving civil society groups and that funding from the lottery has not been effectively distributed to charities either, rather often going to government agencies, well-connected ‘civil society’ organisations, and sports bodies which could generate their own income in many cases.

In both the cases of the NDA and the lottery, civil society groups perceived to be critical of government complained they were bypassed when applying for funding. ANC bigwigs are increasingly establishing ‘charities’, which often is really more about securing public money for patronage purposes, and to buy political support of communities rather than actual ‘charity’, community upliftment or development.

South African state-owned entities (SOEs) rarely give to social justice civil society organisations. Most of the SOEs have foundations, which supposedly contribute to corporate social responsibility. The SOEs under former South African president Jacob Zuma’s presidency often gave to the ANC as a political party, sponsors sports events (Stephen Grootes 2017). SOEs are generally not funding programmes strengthening democracy or social justice initiatives – for fear of raising the ire of the ANC and government.

Given the decline in international development funding, South Africa will have to secure funding for civil society organisations from its own sources.

There is no shortage of private sector money in South Africa. However, individual and corporate South African philanthropists, foundations and corporates have often not funded social justice issues, causes, and organisations (StatsSA 2017). Furthermore, they often also shy away from supporting programmes strengthening democracy, for fear of being seen to anger government (Heywood 2018).

Corporate South Africa has mostly focused on black economic empowerment (BEE) and corporate social responsibility (CSR) programmes. However, most of the BEE since 1996 has been focusing on the basis of white business giving shareholding to prominent ANC politicians turned businessmen, dubbed “political capitalists”, rather than to genuine black businesses, black employees or community groups.

South Africa’s New Companies Act, requires listed and state-owned companies with significant public interest dimensions to establish social and ethics board committees. These committees must take ownership of corporate social responsibility, as companies are now legally obliged to have a sustainable impact on the environment, communities, stakeholders, consumers and employees.

However, CSR is overwhelmingly seen by many South African civil society groups as ineffective as it often focuses on projects which would provide good public relations, on sports and on celebrity-driven initiatives.

Currently, solidarity across race and class is often absent in South Africa. Some white rich individuals often argue there is now a black government that should be looking after its ‘own’, that black capitalists should help, or feel it’s ‘patronising’ to help poor blacks.

At the same time, some black capitalists also say now that there is a black government, individual black people must pull themselves up by their own boot strings. Black political capitalists, many who ironically made their money through political connections in the ANC and the state, through black economic empowerment (BEE) and affirmative action programmes and through getting state and private sector contracts because they are black, are also rarely giving generously.

In the democratic era, many citizens have withdrawn from philanthropy, arguing the ‘legitimate’ state should now step in to help the vulnerable. Many black former struggle cadres, who made it big in democratic South Africa, often do not give to civil society organisations.

They build their post-apartheid assets – mortgages, vehicles, and furniture using debt. However, state failure has meant that they are paying an additional premium for private schooling, health, and security, as well as paying higher interest rates on everything from insurance to car loans because most had no credible financial history, collateral, and income in the pre-1994 era.

In addition, many black middle-class individuals have to pay a black tax – paying for the upkeep of poorer cousins. Many baulk at providing more “philanthropy” to those unrelated to them. Young black professionals are not yet giving in sustainable ways.

Currently, solidarity across race, class, ideology is often absent in South Africa. Some white middle-class citizens either argue there is now a black government that should looking after its “own”, black capitalists should help, or feel it’s ‘patronising’ to help poor blacks. Many white middle class do support specific environmental campaigns, such as saving the rhino.

Civil society organisations should get more involved in how lottery money is spent, allocated to organisations and to ensure that its application processes are transparent, simple and quick.

It should be involved in ensuring that more competent people are appointed to these public agencies, monitor their activities and their funding distribution, to ensure  that it goes to deserving communities and groups.

Furthermore, civil society must also become more engaged, play a stronger oversight role and hold the Social Development Department accountable, over how it distributes resources to charities, to ensure that scarce public resources are not wasted.

BEE is a potential new revenue stream for civil society. BEE is increasingly rejected by black South Africans because it empowers a small black and white elite. The calls for nationalisation and expropriation of land are partially due to the perceived failure of BEE and affirmative action.

All BEE transactions should henceforth include civil society organisations as key partners and beneficiaries, rather than individual black political capitalists. Social corporate responsibility in South Africa should focus more on funding social justice, democracy-building and governance initiatives. Social and ethics board committees must ensure this happens.

Likewise, municipalities could also introduce a system whereby citizens can give a percentage of their municipal tax to local civil society organisations.

In the South African case, the proceeds of such a tax designation could be put into a Civil Society Fund, which would be managed by civil society. Alongside such a mechanism could also be more generous tax incentives to companies for giving to social justice civil society organisations.

Katerina Hadzi-Miceva (2007) Legal and Institutional Mechanisms for NGO-Government Cooperation in Croatia, Estonia and Hungary”. Paper presented at the conference on October 25-26 in Warsaw, ECNL and Institute for Public Affairs (IPA), Poland

*This policy brief was presented at the Human Rights Festival, Constitutional Hill, Johannesburg on 23 March 2018.

Our heritage is a successful civil society

Let’s imagine that aliens visited South Africa in late 1993, abducted a South African and then returned him or her home 25 years later….