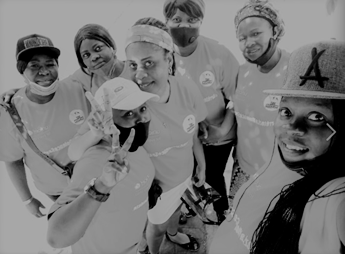 Theirs was a journey of hope as they travelled from the Great Lakes region (DRC, Burundi, Rwanda and Uganda) seeking a better future in South Africa. Many of them are civil war refugees and victims of ethnic tribal violence. For these women, South Africa therefore seemed like a haven where one can pursue a bright future away from the life threatening realities happening in their countries of origin.

However, this hope for a better future has been marred by countless unfortunate circumstances that have resulted in the migrant women being even more vulnerable.   In May 2019, as predicted, the run-up to South Africa’s General elections included outbursts of xenophobic political rhetoric and violence against foreign nationals. This resulted in multiple cases of xenophobic violence against the migrants, most of whom were resident in communities in Gauteng and KwaZulu Natal provinces. As their circumstances continued to deteriorate, the migrant women, along with their children, resolved to camp in front of the UNHCR offices in Pretoria as a way to lobby for resettlement in another country since they strongly felt that communities in South Africa were no longer safe for them.  A court order was obtained by the proprietors of the space the refugees were occupying, ordering the migrants to immediately vacate the area. The South Africa Council of Churches intervened and negotiated for the migrant women and children to be temporarily sheltered at Lindela Repatriation Centre. Lindela, however, is a repatriation centre and is not mandated nor designed to shelter refugees. In addition, the conditions at the centre were not ideal especially for the 128 children, who made up most of the numbers. In total, 254 migrants ended up being sheltered at Lindela.

With the coming of the COVID-19 global pandemic the conditions of the migrants at Lindela became even direr. It also became clear that the circumstances facing the women at Lindela were also being experienced by migrant women resident across South Africa’s provinces. Firstly there were the obvious serious health risks that the novel virus presented which as the global statistics showed, was spreading rapidly and causing the death of many people. Even more concerning was how COVID-19 had amplified domestic violence, further compounded by the lockdowns. Apart from this, the lockdown brought about abrupt loss of livelihoods leaving women and their children vulnerable. In this regard, ACTION Support Centre through its partnership with UNICEF South Africa, launched the Child Protection and GBV Emergency Response to Migrant Children and Adults affected by COVID-19 Project. Under this project interventions aimed at providing Counselling and Psychosocial Support have been conducted as a way of alleviating the extensive trauma experienced by the migrant women. In addition the project embarked on widespread Women Empowerment activities in recognition of how empowerment can be a tool for the women to economically emancipate themselves as well as assist them against Gender Based Violence and Femicide (GBVF). The project also sought to enhance COVID-19 awareness among the migrant community through inclusive messaging methods.

The transformations under this project have been nothing short of miraculous and inspiring. The counselling and psychosocial support that has been offered to the migrant women who were sheltered at Lindela had directly resulted in them leaving the facility and seamlessly reintegrating into local communities. This has increased their chances of leading gainful lives away from Lindela where they faced an uncertain future.  The same is true for the migrant women resident in communities in Limpopo and KwaZulu Natal. The counselling sessions were a central aspect of their recovery from the trauma they experienced. In Mzingazi, a rural community in KwaZulu Natal, the counselling sessions galvanised a group consisting of Swahili speaking migrant women from Congo, Uganda and Burundi to form a support group. This structure has assisted the independently women to overcome their difficulties.

The highlight of the Women Empowerment interventions was the empowerment course developed by ACTION Support Centre and endorsed by UNICEF South Africa. The course consisted of Business Entrepreneurship, Gender Based Violence Prevention, Leadership and Conflict Transformation. Part of the training process included the issuing of a certificate of participation to each of the women who participated. This course was aimed at both migrant and local women in KwaZulu Natal (Richards Bay) and Gauteng (Sunnyside, Vanderbiljpark, Yeovil). Barely 2 weeks after the trainings some of the women either started or revived their business that had been affected by COVID-19 as a direct result of the course.

The empowerment drive however was not only limited to training on how to start businesses or sustain livelihoods, but also consisted of the provision of information that gave the women the ability to defend themselves in cases of GBV or prevent it altogether. Apart from this the empowerment activities also consisted of COVID-19 awareness campaigns as a way of equipping the women with information on how to stay safe. A key aspect of these campaigns was how the migrant women took a leading role in the dissemination of information in their communities.  Armed with sharp wits, confidence, sanitary towels and ACTION/UNICEF branded t-shirts as well as fliers printed in 4 different languages (English, Zulu, French and Somali), the women have led successful awareness campaigns that have really resonated with local community members especially given the similarities of the experiences lived through in the fight against Gender Based Violence.

In March 2020, President Cyril Ramaphosa announced cabinet’s plans to put South Africa on lockdown as part of the government’s efforts to reducing the…