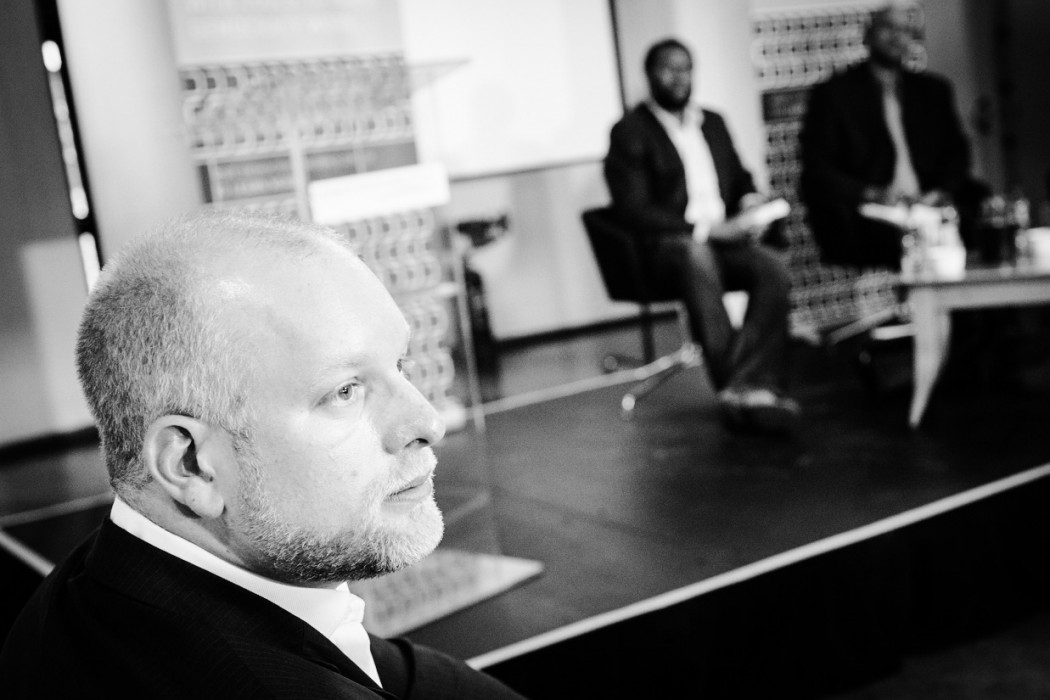 France, and with it Europe, is reeling from its second deadly mass terrorist attack this year. The attack in Paris last Friday was executed with what resembles commando style military precision and efficiency.

The attack seems nothing short of an act of war against liberté, égalité and fraternité, the founding principles of the French Republic and equally some of the core principles that underlie the EU.

How will Europe respond? What will be the solution? The “American solution”, in the Bush era, would have been to ramp up military posturing and expenditure, foster fear, curtail civil liberties, increase mass surveillance, wage wars where “Islamic” life is perceived as cheaper than in the West, scrap due-process norms, water-board and introduce computer-gaming kids in containers in Texas shooting up hospitals and wedding parties via drones.

GRIEF-STRICKEN: Jean-Marie de Peretti mourns the loss of his daughter Aurelie, 33, one of the victims of the attack on the Bataclan concert hall, seen in the background, a site of the terror attacks in Paris. Picture: AP

Such “solutions” bulldoze human rights and weaken democracy, while giving Jihadis what they are looking for: the undermining of democracy’s moral high ground while providing the Jihadis with a compelling narrative for radicalised followers to die as martyrs fighting infidels who have turned their nations into surveillance states and brutalised the rights of young Muslims.

The “hypocrisy of human rights” as being applicable to only those perceived as traditionally “western” or “European” and not those from elsewhere will continue to foster resentment at best and at worst, motivation for terrorism. The Bush- era solution ignores the fact that in a free society, in a democracy, the state cannot be omnipresent and secure our safety 100 percent, all the time. Only totalitarian regimes can offer such promises.

Democracies are “risk societies”. The idea is that we elect responsible governments that limit our risks by for example regulating air transport safety, banning and policing drunk driving, banning the sale of firearms, assisting in creating egalitarian societies that don’t create an ever-expanding pool of have-nots.

In this line of thought, we should expect our responsible democratic governments not to fuel resentment abroad and create enemies; enmities that are passed down from generation to generation.

Although political populists in Europe with nationalist and xenophobic agendas will no doubt attempt to seize the moment to further their narrow-minded parochial agendas, a move away from a more concerted response from the EU will further jeopardise Europe. Fragmentation and national-above-European interests will not resolve the major challenges Europe is facing. Now is the time for more integration of foreign policy, of security policy, of fiscal policy and of foreign development policy towards those places that are partners to Europe, that are of strategic importance or which create problems for Europe.

Europe’s response can only be one: a response of tempered, constructivist continuation of the deepening of its original value base, its local democracies and its EU project of more effective integration and collaboration with like-minded partners. It is time for the EU not to cut budgets on “soft power”, but to wield it wisely and with more effort. And not only on Mediterranean shores. Why are Nordic countries so popular with refugees? Yes, the standard of living there is great, but they have traditionally supported development assistance in the developing world with authenticity and based on humanist principles.

It is high time for the EU to become more strategic with its soft power and invest whole heartedly and flexibly in democracy, good governance and economic sustainability, without which pockets of instability will continue to exist and grow.

A backlash against Europe’s steadily increasing refugee population cannot be an answer and must not be tolerated. These people have fled their home countries in many instances to get away from slaughter and suicidal maniacs.

There is evidence that some of the Jihadis who committed the atrocities in Paris entered the EU as Syrian refugees via the Greek island Lesvos. This makes their crimes the more heinous, using the unsettled refugees as a cover, people who were forced to flee Syria for the very violence Islamic State, among others, unleashed on their country.

SECURE SITE: Police guard the hotel of the Dutch soccer team in Hanover, Germany. Prompted by the attacks in Paris, security was beefed up for the soccer match between Germany and The Netherlands on Tuesday. Picture: EPA

The fear that the atrocities in Paris have created within the EU population, is likely to impact negatively on European attitudes toward the Syrian refugees. In this way, the refugees receive double punishment from Islamic State.

It will be a major challenge for the EU to treat genuine Syrian refugees generously and assist with their early settlement within the EU, while dealing with the increased threat of terrorism by consolidating and deepening the rule of law and democracy as the founding principles of the EU.

European politicians now speak about being at war with Islamic State. What happened in Paris was “an act of war”, according to President Francois Hollande.

However, increased military operations in the Middle East or northern Africa may not be the best answer. The terrorist mayhem can only be overcome if the underlying causes, within the Arab region, in Africa and within the EU, are tackled with comprehensive and integrated security, developmental and governance agendas, reinforcing the EU values of human rights and freedoms.

The Nigerian army under former president Goodluck Jonathan, provided a good example of how democratic principles were side-lined with its atrocities in its fight against Boko Haram. Similarly, the US army’s drone attacks and “collateral damage”, while allegedly scoring some short-term hits against terrorists, have inadvertently become instrumental in motivating and recruiting more Jihadis.

Now is the time for true political leadership, leadership that guides a fearful and insecure EU populace to stand tall in the face of adversity and to keep Europe united as a beacon of democracy and rule of law.

Yes, Germany’s Angela Merkel has shown signs of this in how she welcomed the Syrian refugees. EU Commission president Jean-Claude Junker too. Hollande says the right things. But have they got the vision, courage and efficacy of a Konrad Adenauer, a Willy Brandt, or a Jacques Delors to take the EU project forward despite the manifold challenges it faces?

*This article first appeared in the African Independent.

Olmo is Executive Director and co-Founder of Democracy Works Foundation. He has worked as a political networker, analyst, social entrepreneur, development practitioner and innovative manager on issues of human rights and democratisation in both Africa and Europe. He has spearheaded various leadership, democracy building and conflict resolution initiatives, in addition to managing funds dedicated to strengthening the role of civil society, political society and media through cross-sector approaches to deepening democracy.

Olmo leads the DWF Team on a day-to-day basis. Besides DWF's regional board, Olmo also sits on the DWF Malawi board.

The controversy hit when clothing store H&M ran advertisements featuring a black boy wearing a hoodie with the words ‘Coolest monkey in the jungle’….