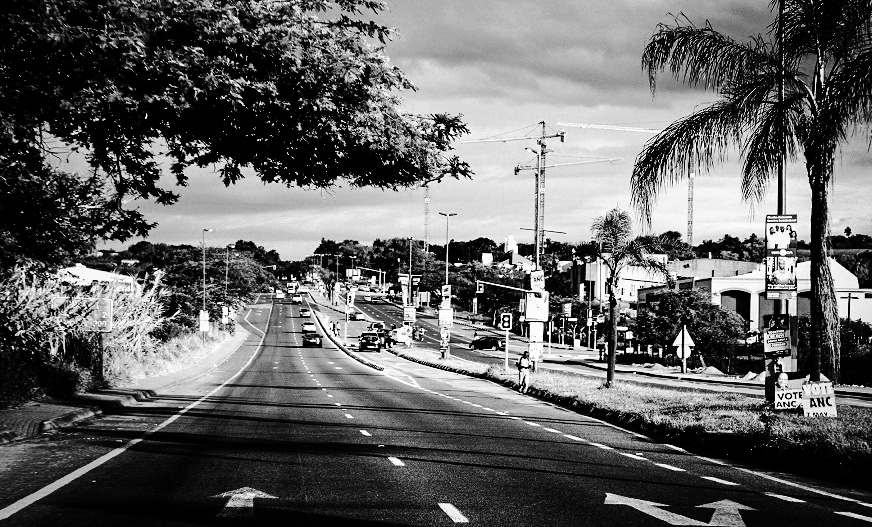 “I left my heart in South Africa”, the bumper sticker says in one of the ubiquitous curio shops somewhere between White River and Graskop, Mpumalanga.

Driving along the N4, with its undulating hills and somehow, despite the desperate drought, green banana plantations and orange groves, the heart of the country remains as achingly beautiful as ever. It also remains equally bewildering, as the increasing contradictions of South Africa are writ large.

Amid the infinite natural beauty and richness of the landscape there lies a malaise and lack of care that can only be ascribed to a country deeply divided and one in which the price of poor governance is being paid by the poor and most vulnerable.

Driving into Nelspruit (Mbombela) one is reminded that this once small outpost is now threatening to become a metropolis of malls, shiny shops and shiny cars. At its edge, the monument to the 2010 FIFA World Cup, Mbombela stadium reaches octopus-like into the sky. The “park and ride” signs indicating perhaps recent use? Development has reached such levels that locals say soon Nelspruit will be “merged” with nearby White River. The defining features labelling every South African dorp, city or town, the townhouse and estate developments, are already being signposted on the outskirts.

One gets the feeling though that this shimmer will be short-lived. And so it is as warning signs of potholes ahead litter the regional roads between White River, Hazyview and Graskop. The region boasts over 2-million macadamia nut trees and the sale of bags of nuts is ubiquitous as desperate locals seek to eke out a living. One lazy Sunday afternoon, a cavalcade of SUVs with flashing blue lights is seen speeding past several of these roadside stalls. One wonders whether these electioneering politicians understood that their flashing blue lights had nearly rammed into the stalls of their poor constituents? Did they care?

One wonders what might happen if the Mpumalanga Tourism Authority showed a bit more imagination? Imagination is mostly free and yet, the roadside stalls are ramshackle, many deserted or if they are “manned”, the owners seem tired of life and struggle. Tar-poles and black plastic bags hold up the stalls and if they are lucky there is a bit of hessian as well. A brightly coloured stall and greater incentives to locals might well create a shift in mindset and an idea that they too might participate meaningfully in the tourism trade which drives so much of what happens in these areas.

At Sabi Falls locals are left to ensure that the site is maintained, and the air of neglect is palpable. A “wet paint” sign greets visitors as locals do it for themselves if the state won’t, or can’t, it seems. These places seemingly operate as if without owner or caregiver. Nearby Barberton, part home to Jock of the Bushveld fame, seems to be falling apart from drought and lack of opportunity as local people sit, bored and unemployed in the centre of the rundown town. In the midst of it all, election posters scream at those contemplating a bleak, jobless future.

But South Africa is a land of contradictions and one that mostly works for the rich and middle class, able to avoid the less palatable. The Kruger National Park maintains its status as a world-class site. Of course, the large statue of Paul Kruger against the wall of the Skukuza rest camp is also a reminder of a fraught past. To Kruger’s credit he had the foresight to proclaim land for a national park as far back as 1898.

Leaving its gates, one is confronted again with the deep inequality and divisions that persist in South Africa. And confirmation that the challenges of structural inequality and unemployment will not be solved overnight. Numbi is awash with informality and haphazard building works and unfinished roads. The rules of development seem not apply if one is poor and no attempts have been made to create any green “lungs” or open spaces for people to live in community.

Where are the play parks for children to be free in or do the poor only deserve the dusty wasteland on the fringes of game reserves designed for the middle-class holiday? And so, what should be permanent feels decidedly makeshift as houses are put together and informal trading pops up all around, many in desperately broken places.

The potholed roads and signs imploring motorists not to pay traffic officers trying to extract bribes show the price of corruption in one of South Africa’s most corrupt provinces. Its Premier David Mabuza seems steeped in controversy. He has been accused of being a spy and has himself accused his political rivals of trying to poison him. This is the same premier whose office sanctioned the R70-million memorial services for Madiba and then could not produce a video on the event. Said video was alleged to have cost in excess of R3-million. When corruption takes root, the poor remain forgotten, roads remain potholed and a careless neglect permeates even the most beautiful of places. The contradictions of middle-class bushwhacking holidays and squalor remind us acutely of our context.

On the winding road to Pilgrim’s Rest, that place of gold rushes, strangely stuck in time, election posters litter even the most obscure bridges. The DA is right in there but this is ANC territory, make no mistake. In the greater ANC succession race of 2017, Mabuza is part of the informal “Premier League”, along with Supra Mahumapelo of North West and Ace Magashule of Free State, who have loyally remained pro-Zuma and influenced succession races within the ANC Youth League and Women’s League.  Mabuza himself hinted that ANC members might help Zuma pay back the money he owed on the Nkandla development.

Again, the distortions and distractions of power make for poor governance and a failure to pay attention to the very detail that would make for a thriving province using its tourism market to maximum effect.

Ahead of local government elections, one wonders what it is that political parties offer to the poor and marginalised apart from platitudes and slogans. The DA’s poster of Mmusi Maimane calling for change under the road marked Louis Trichardt in Sabie seems out of place, detached. And the EFF’s slogans of “bigger houses” simply seem laughable or even farcical and some perhaps even dangerous. Their slogans are short and thus possibly memorable. Quite how much EFF organisation there is on the ground remains to be seen, however. The ANC, Zuma’s face emblazoned on every poster, promises better lives for every community. But what will that mean for the people living in dilapidated squalor in nearby Numbi or on the fringes of the places where the wealthy holiday?

What kind of inclusive development is the ANC seeking to bring to the people of Mpumalanga? Can it truly speak of these so-called “blue and green economies” when little attention is paid to the way in which locals really can use the “green economy” to lift themselves out of poverty and live lives of dignity? No doubt these projects do exist yet for the vast majority the land and what it produces is not for their actual participation. The poor remain very much on the fringes of wealth production.

To change these paradigms will take leadership and commitment to a truly inclusive economy which is not merely extractive. It cannot simply be about making the wealthy wealthier. A malaise has set in and threatens to become “the way we do things”, not with excellence and enthusiasm but rather choked by the weeds of corruption and mediocrity. Our country could be so much more if we imagined ourselves differently and didn’t accept the poor development, potholed roads, corruption, tenderpreneurs and factional politics.

The Mpumalanga politicians weaving their way recklessly through Sunday afternoon’s non-existent traffic seem to have forgotten why they came.

So a sojourn into the heart of the country speaks of a place full of contradictions but still “beautiful beyond any singing of it”. It remains the home of the Big Five and wide open spaces, sunrises and sunsets that words cannot fully describe. British journalist, Gavin Bell, in his book Somewhere Over the Rainbow, covered South Africa during the transition to democracy and retells the stories of his return here in 2001. He wants to find out “what makes this country beloved and why do people cry over it?” What he found then was “a hauntingly beautiful country strangely confused by its multiple identities, struggling to come to terms with itself and swinging between hope and despair”.

It’s 2016 and that’s still us, it would appear. One can be sure however that the bumper sticker was right and that like all of us, Bell too left his heart in South Africa.

It’s that kind of place.

A vision of hope – the power of international solidarity

Hanne Løvlie, an extraordinary, energetic young Norwegian woman with an implacable sense of social justice, had a dream to improve the lives of women…