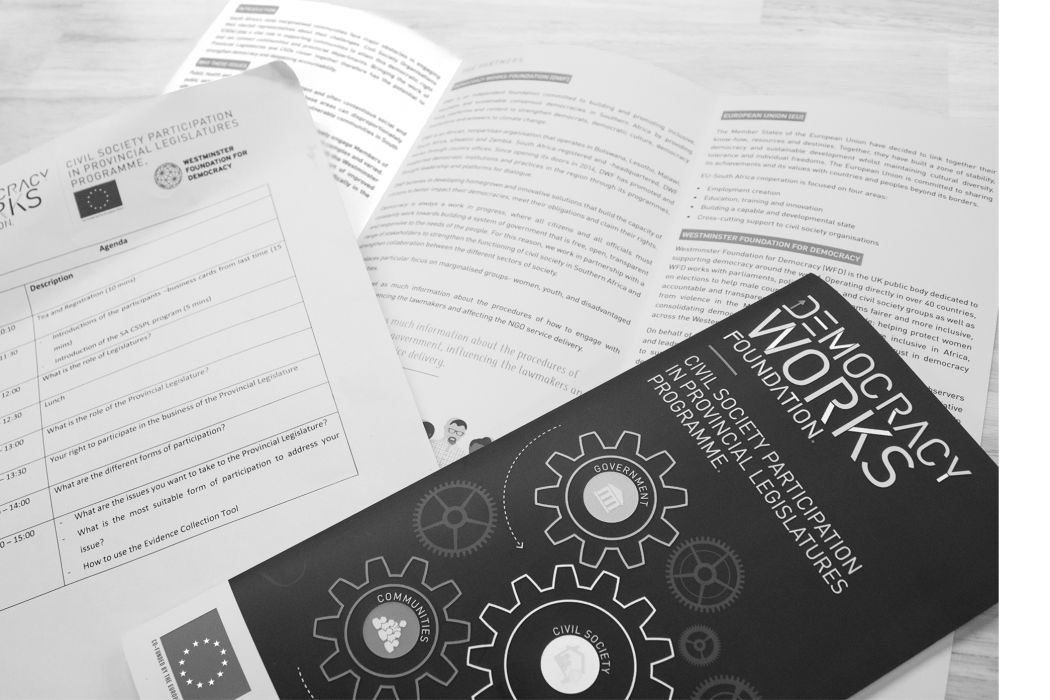 The close of 2019 also concluded year two of the Democracy Works Foundation (DWF)’s project to support improved engagement between provincial legislatures and marginalised communities in South Africa, specifically in the areas of public health and safety.

The South African Civil Society Organisation in Provincial Legislature project (SACPPL), run in partnership with the Westminster Foundation for Democracy and with co-funding from the European Union, is operating in the provinces of Limpopo, North West, and Northern Cape.

South Africa’s most marginalised communities face major obstacles in engaging their elected representatives about their challenges. Civil Society Organisations (CSOs) play a vital role in helping communities to attain this democratic right but many lack the skills and resources to do so effectively.

2019 was a year of many positives for the project. SACPPL made exciting strides in strengthening the participation of CSOs in processes of the Provincial Legislature and in bridging the gaps between CSOs and members of parliament.

The findings of the March 2019 workshop provided a comprehensive baseline of the needs and skills of the CSOs which are part of the project. The findings also offered a practical framework to guide the development of a learning programme to address their knowledge and skills, with the aim of improving interactions with Provincial Legislatures.

The information gleaned through the March process was at the heart of a second cross-provincial workshop in May 2019, in which CSOs from all three provinces gathered in Johannesburg to learn more about the opportunities that legislatures present for greater participation in government processes, and how to use this platform to allow community voices to be heard.

The workshop focused on distinguishing the difference between the three spheres of government, identifying opportunities for public participation in the areas of health and public safety, and understanding the value of oversight and public participation in improving state responsiveness. The workshop concluded with CSOs identifying challenges in their work and communities which they could take to the Provincial Legislatures.

In the second half of 2019, the SACSPPL team continued to support, mentor and guide CSOs wishing to raise their issues with the Provincial Legislatures.

A number of engagements demonstrated the effectiveness of this process.

Lesego has a background in governance, policy development, and research. He previously worked at the North West University in Student Life, where he focused on student leadership development and training. His academic highlights include being part of the Linnaeus Palme International Exchange Programme in Sweden. He holds a BA Law and BA Honours in Political Studies and is currently studying towards his MA with a research focus on Legislatures and Democracy in the continent at North West University.