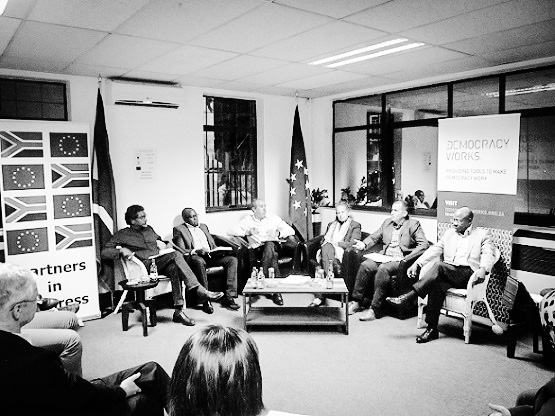 The “EU Inspiring Thinkers Series” is composed of dialogues and discussions on critical and challenging themes that respond to the interests of South African civil society. Exchanges between EU-based and SA-based CSOs are also a priority for the EU, as documented by the 2014 “Civil Society Organisation (CSO) roadmap”, which aims to support SA “civil society [to] express, voice and influence key policy processes underpinning the EU-SA Strategic Partnership (such as human rights, security, trade, migration, climatic change) at various levels (national, regional, global)”.

The European Inspiring Thinkers Series III was launched on the 17th February in Cape Town – coinciding with the end of the parliamentary season opening. This second dialogue, “#Corruption #Human Rights… one or the other”, was jointly hosted by the European Union Delegation to South Africa, the Foundation for Human Rights (FHR), the Democracy Works Foundation and the Institute for Advancement of Journalism (IAJ), as a panel discussion held at the IAJ auditorium on 16 March. The dialogue focused on the impact of corruption on human rights, and increased awareness of the need for civil society, business, government and other societal formations to collaborate and work towards a common purpose in the interest of that “better life for all.” 68 people participated in the dialogue.

Amina Frense – executive producer, former managing editor, political editor, editor – training & development in broadcast journalism. Amina has worked as a journalist and a former foreign correspondent. She has trained journalists, media and communication practitioners as well as government delegates locally and abroad. She is a producer of documentary films. Currently, she is a member of SA Press Council, a founder and council member of the SA National Editor’s Forum (SANEF), and is chairperson of the Institute for the Advancement of Journalism (IAJ)

Hennie van Vuuren works on issues of secrecy, access to information and corruption. He recently took on a position of Director at the research project Open Secrets. Prior to that, he was a Research Associate at the Institute for Justice and Reconciliation in South Africa, focusing on accountability for economic crimes during political transitions (particularly apartheid-era economic crime). He is a past fellow of the Open Society Foundation for South Africa and has worked as Director of the Institute for Security Studies in Cape Town and for Transparency International in Berlin. Hennie is active in the South African Right2Know campaign and, together with Paul Holden, co-authored The Devil in the Detail: How the arms deal changed everything.

Mondli Makhanya, who is currently the Editor-in-Chief of City Press, has been in the media industry for more than 26 years.  He is one of South Africa’s most respected editors and an influential columnist.  Makhanya’s insights on South Africa’s political and social developments are much sought after.  He is a regular speaker at public and private events and is frequently invited to speak on panels across a range of topics. He began his career at the Weekly Mail where he covered the transition to democracy and also reported on business and economic debates during that period.  During this time he had a stint on Newsweek magazine in New York. After the Weekly Mail, he worked for The Star as political writer and later as deputy news editor and executive editor. He was one of the founding editors of Sunday World before moving onto the Sunday Times where he worked as political editor. Makhanya has served as editor of the Mail&Guardian, Editor-in-Chief of the Sunday Times as well as Editor-in-Chief of the Times Media Group.  Makhanya has also served as Chairperson of the South African National Editors Forum and as Treasurer of The African Editors’ Forum.

Ivor Chipkin is a Director of the Public Affairs research Institute (PARI), and an Associate Professor at the University of the Witwatersrand. He completed his PhD at the Ecole Normale Superieure in France; he received an Oppenheimer fellowship in 2005 and took up a position at St Anthony’s college at the University of Oxford. He spent 4 years in the Democracy and Governance Programme at the Human Sciences Research Council where he acquired an intimate knowledge of government departments and agencies. In 2007 he published “Do South Africans Exist? Nationalism, Democracy and the Identity of ‘the People’” (Wits University Press). He has developed studies on governance, government and state. Ivor has also published widely on questions of government, governance and the State in South Africa.

Bonang Mohale is currently Vice President Upstream and Chairman of Shell Downstream South Africa (Pty) Limited, where he is Chairman of the boards of Shell South Africa Holdings (Pty) Ltd; Shell Downstream South Africa (Pty) Ltd; Shell South Africa Refinery (Pty) Ltd and South African Petroleum Refinery (SAPREF). Until 2008, he spent six years as the CEO of Drake & Scull FM SA (PTY) Ltd, an integrated Facilities Management company. Prior to this, he held a number of senior management positions at Sanlam, Innofin, Gensec Property Services and Fundamo SAA and Otis. In 1997 Bonang was awarded the Black Management Forum’s (BMF) Manager of the Year.  He received the Presidential Award for his “Servanthood in South African Industry & the Economic Empowerment of Previously Disadvantaged Individuals” in 2001. Bonang has been a guest on numerous International TV, radio and magazine programmes.  He travels regularly to the rest of Africa, Europe and the Americas.

Respondent, Jay Naidoo, a political and social activist with a long history of fighting for social justice both in South Africa and globally. Was the founding General Secretary of COSATU. Served in the first democratic Government in the Cabinet of President Nelson Mandela serving as Minister of Reconstruction and Development and then Communications. Also served as the Chairman of the Development Bank of Southern Africa until 2009 and as Chairman of the Global Alliance for Improved Nutrition until 2015. He currently is a Board member of the Mo Ibrahim Foundation and is a trustee of the Earthrise Trust focusing on models of rural development and community driven livelihoods in agriculture to tackle hunger. He has recently published a book called CHANGE! Organising Tomorrow, Today and was launched last week.

Respondent, Errol Holland qualified as a doctor from the University of Cape Town in 1972, and then as a specialist in internal medicine. He earned a PhD and registration in the sub-specialty of clinical haematology. He currently serves as a consultant with the Foundation for Professional Development, an organisation that is involved in academic training in the private sector.

Moderator, Dr Khulekani Moyo is a Senior Researcher at the Mandela Institute in the School of Law, University of the Witwatersrand. Khulekani received his doctoral degree in Public Law from Stellenbosch University, an LLM in Public International Law from the University of Oslo, Norway and an LLB (Hons) from the University of Zimbabwe. He also holds two diplomas in the International Protection of Human Rights and the Justiciability of Economic, Social and Cultural Rights from Åbo Akademi University in Finland. Khulekani is an admitted attorney, conveyancer and notary public. He has held the positions of Head of Research at the South African Human Rights Commission, Senior Lecturer at the Nelson R. Mandela School of Law, University of Fort Hare and Researcher at the Norwegian Centre for Human Rights. His research interests include international law, international human rights law; business and human rights; intellectual property law and human rights; international criminal law; constitutional law; and regional integration law.

Author of Concept Note.  Prof William Gumede is the Executive Chairperson of Democracy Works Foundation. He was former Deputy Editor of The Sowetan newspaper and is Associate Professor at the School of Governance, University of the Witwatersrand. During the anti-apartheid struggle, Gumede held several leadership positions in South African student, civics and trade union movements. He was a political violence mediator and area coordinator for the National Peace Committee during the multiparty negotiations for a democratic South Africa and was seconded to South Africa’s Truth and Reconciliation Commission. He is the author of several number 1 bestsellers. His more recent books include Restless Nation: Making Sense of Troubled Times (Tafelberg); and South Africa in BRICS – Salvation or Ruination (Tafelberg).

The dialogue was a success in terms of content, attendance and feedback. Shell Chairman Bonang Mohale made references to the ‘Nene-Gate and Nkandla-Gate’ sagas, examples of corruption in the government sector. He implored the people to take up a stance, and say “enough is enough”, and “not in our name”. WISER Director Ivor Chipkin advised that he does not see these as corruption, but rather failed policies, politics and governance. IAJ Chair Amina Frense highlighted the critical role of the media in exposing corruption and informing the nation. Henie van Vuuren surmised that corruption, as a crime undermines the human rights framework of our constitution.

Former Minister Jay Naidoo asked what is democracy and human rights if people cannot feed their families, and spoke about his experience on the farm in the Free State, where a white farmer had cut off the water supply to farm workers for 3 years. It was the ANC-led government that restored the water. Naidoo highlighted the shame of such behaviour given SA’s colonial and apartheid history. He also noted that SA remains one of the most unequal nations in the world.

Naidoo, who led the RDP during Nelson Mandela’s cabinet of 1994, shared his disappointment of the RDP being aborted by the Mbeki Government. He pointed out that the crisis of inequality has worsened since then.  He implored Mohale to work closer with the labour community in reducing this inequality. As a social activist and leader of the formation of COSATU in the mid 80’s, he mobilised people for an active citizenry, to fight against corruption that is undermining the human rights ethos underpinned in SA’s constitution. Jay advised that we must not despair as every crisis provides an opportunity.  We must understand how we got to where we are, and how to fix the mess. His newly launched book on “CHANGE” addresses these questions.

Consultant for the Foundation for Human Rights (FHR), Errol Holland, spoke about the role of NGOs in supporting government to promote and uphold the human rights-based constitution. He noted that efforts could be frustrated by key institutions, such as the judiciary and criminal justice system that are rife with corruption.

The audience appreciated the dialogue platform to engage on such a controversial topic. In particular on corruption that has the potential to derail any progress to peace, stability and social cohesion and to harm our freedom and democracy.

Key questions were noted from different sectors of society. David Lewis, Head of the NGO ‘Corruption Watch,’ noted that business and the private sector are crucial to the conversation on corruption. A Turkish citizen pointed to the lessons from Turkey today. Willie Hofmeyer, former Head of the SIU, a chapter 10 institution in terms of the Constitution of South Africa, spoke about promoting the independence of cchapter 9 and 10 institutions. Zane Dangor, the recent DG in the department of Department of Social Development, also advocated for strong support for institutions such as the judiciary.

Surveys indicated that audiences appreciated the dialogue platform and the focus on controversial topics such as corruption.  An international conference on corruption, to continue to raise the awareness of this threat to humanity, peace and stability.

The overall objectives of the action were to:

In addition to small steps towards the above, SA civil society actors gained a stronger voice, with the potential to increase cooperation with the SA government. For example: